The Theater of Nature or Curiosity Filled the Cabinet 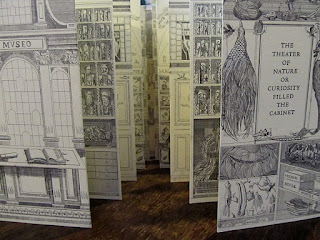 We have recently restocked this concertina book by Angela Lorenz first published in 2002. It is a short history of the Cabinet of Curiosity, written as a poem and lavishly illustrated with etchings and watercolours inspired by archive and museum material.

Described on the back cover as a ‘pop-up museum housed in a magic lantern’ If a cabinet of curiosity could morph into a book then this would be its form. The cover mimics the wooden panelling of a display case, central to which is a ‘stained-glass window’ depicting  one of the curiosities (a boy with webbed feet and dog-head knees, curious indeed!).

Lorenz takes us through the rise and fall of the cabinets, collected by Kings and noblemen, wealthy merchants and early scientists (or natural philosophers as they were then known) to entertain visitors and prove their grasp of the world.

Along the way we are provided with beautiful illustrations of unicorns, lobster claw flutes, giant-headed men and two-tailed lizards.

The Theater of Nature or Curiosity Filled the Cabinet costs £25 and is available in the Bookartbookshop now.