What happens if two book artists from opposite ends of the globe meet, fall in love, and then are forced apart again by the circumstance of where they live?

That's what happened in 2005 when Red Fox Press publisher Francis Van Maele (pseudonym Frantic) and Kim Hye Mee (pseudonym Antic-ham) met at a book fair in Seoul. A month of passion and discovery followed. But then Francis had a plane to catch, back to Achill, Ireland. 5000 miles away.
Of course they found ways to connect with each other, despite the distance. Like every other couple in a long distance relationship they chatted online, they posted love letters to each other, they met up for short periods. But it did not stop there. They were book artists so they expressed their love in the way they knew how; through books.

So many books. Intricate, complex and beautiful collaged books dashed off as if they were blown kisses. I found ten in the shop alone and there are more. All penned under the lovers new combined pseudonym: Franticham. They scrupulously, obsessively documented their time together. They reveal their correspondence in unguarded intimate detail. It is frantic, frenzied, torrid, crazed passion. It is almost literally publishing as an act of love-making.

These collectible books by Franticham, published variously in 2005 and 2006, are available to buy in our shop: Send Me a Pict, Rendezvous, Bus 23, Diary of Silent Fish, Daytripper, It's Your Quiet Heart It's Your Silence, Zine #4, The Routemaster, A Fond Farewell and Travelling Fish. They range in price from £3 to £75.

P.S. Kim eventually moved to Ireland, and correct at going to press, they are still together and making books 8 years later.

P.P.S This post is a subtle reminder to you that Valentine's Day is approaching. 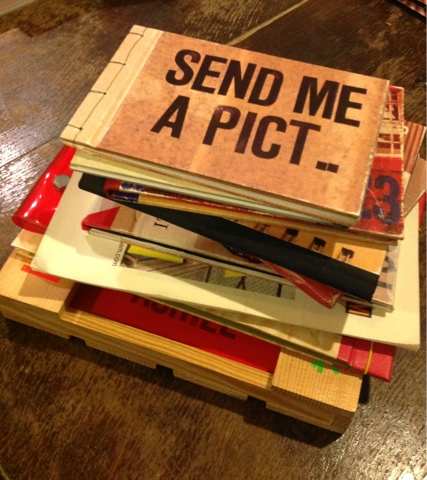