Created by Seekers of Lice, this is the definitive 'Aarr-aarr, aarr-aarr' to 'Zit-zit' of Artist's books. It is a compendium of written bird calls, one designated to each page.

It functions much like a flip book, except instead of the conventional animated image, it is the onomatopoeic words which flicker with life and mutate and morph surprisingly smoothly with each other, due to the alphabetical order of the calls. Twi-wi-wi-wee becomes twit-twit becomes twick-twick-twick.

This is a hugely satisfying, simple to understand, well made book object. It is greatly entertaining flicking through the cornucopia of eccentric calls that our planet's wing-ed beasts (apparently) make.

Like the best Artist's books, no excess-to-requirement information is given, the idea is given plenty of space to breathe. We are given the calls, but not the birds who own them. one is left to guess for one's self who called what, be it the common or the exotic, the Grey Pigeon or the Lilac Breasted Roller.

One can flick through at a sensible pedestrian pace, savouring each 'sooeep tseep' and 'kraaar' on the end of one's tongue, or one can race through the publication at breakneck speed creating a cacophonous aviary in one's mind as the calls spin and tumble from the pages.

It is suitable for bird-lovers, word-lovers, book-lovers and is priced at a very reasonable £8. 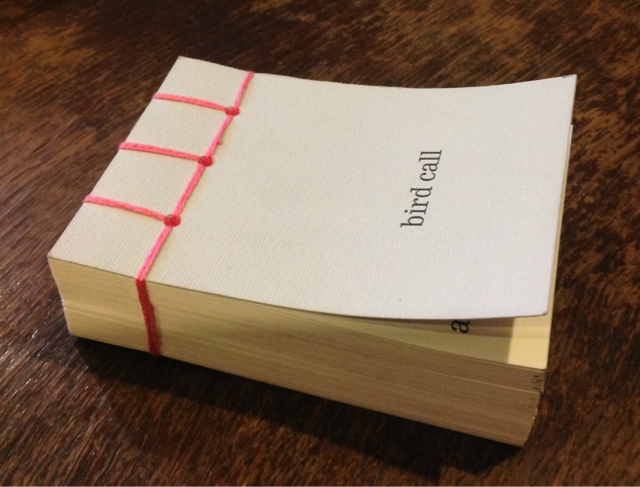