The Badges of Mark Pawson

Book Artist and Creator/Collector of Ephemera Mark Pawson has been making badges from his East London home since 1985. They are a fitting expression of his unique philosophy in art, life and commerce. A believer in the artistic value of everyday design, and producing work in cheap multiples, accessible and affordable for everyone, he has made books about Kinder Eggs, Die-cut Plug Wiring Diagrams and his collection of Scandinavian viking figurines he has christened Noggins.

Over the decades Pawson the One-Man-Production-Line has released badges about books, computers, the weather, the 1990s, Japan, John Cage, Mexican wrestling masks and, naturally, badges about badges themselves.

For the more sophisticated badge-wearer, Mark has also trademarked his own technique for making fabric covered ones, which come in large or small, and a myriad of designs to match your outfit, collected from second-hand fabrics and shirts.

Taking his values of recycling, collecting and appreciating the most unlikely of stuff to its most extreme logical extension, Mark has even produced a limited run of hand bound books constructed entirely out of the used perforated sheets from which the badge designs have been punched out. The book is titled OOOOOOOOOOOOOOOOOOOOOOOOOOOOOOOOOOO, as this is how the cover composed of perforated Os reads. Of course! Mark's work is an example of the best sort of madness: the one that makes perfect sense.

Badges, Books and postcards by Mark Pawson are all available in the Bookartbookshop.
The badges range in price from £3 to £7.50. 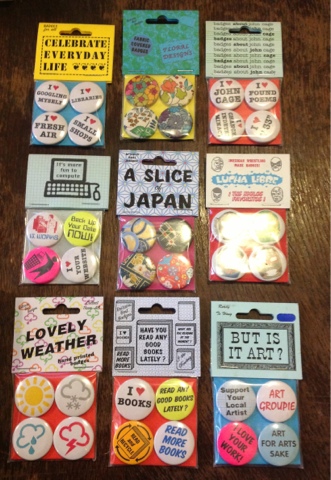