A conversation with Robert Janz


interview and images by Chiara Ambrosio

I was heading for dinner in downtown NYC last June, and as I rushed past the ever-changing streets of TriBeCa, I caught a glimpse of paper and words colonising defiantly the torn pieces of posters and other scattered debris on a hoarding board. It was the day after the Brexit referendum, and the EXIT sign pasted on the wall called to my eye even before I noticed the tiny, handwritten letter S inserted in between the I and the T, turning EXIT into EXIsT. Behind me, an elegant man in a white linen suit and a Panama hat looked at me looking at the work on the wall. He introduced himself as Robert (Roberto after 6pm) and handed me a xeroxed piece of paper with his instagram account on it. When I followed his lead, I discovered a luminous and powerful body of work, at once poetic and defiant: bisons and mountain peaks scrawled across the hoarding boards of downtown NYC, ephemeral water graffitis, and above all a committed lifetime of poetic subversion mapped on the bones of the city. I arranged to meet Robert again so that he could take me on a tour around the neighbourhood, where most of his work can be found by careful eyes. This is the conversation that followed... 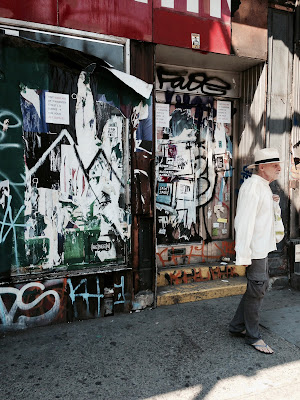 Chiara: Could you introduce yourself?

Robert: As a child I would hear my mother exclaiming: "Bobby!!! You have been drawing on the walls and sofa again!".  In my late teens and early 20s I drew obsessively with a stick on the wet sand between erasing surf on Venice Beach, LA.  A wavy line erased by the incoming waves.  As they pulled back I drew again and again.  These became a project, "Waves Between Waves", which got me into a gallery.  The gallery got me into the Museum.  This eventually led to a Fulbright Scholarship to Spain.  Living in villages in the arid heights of Andalucia I drew with water on the mountain rocks.  My drawings were glyphic, echoes of the most ancient Origin arts.

C: How did you start making work that intervenes into the actual fabric of the world?

R: Humans began drawing on their surroundings, on rocks and cave walls.  So at first, going back to the Origins, I drew on beaches and rocks, out in the non-urban.  I was always trying to get away, a lone ranger on the Journey.  After living in the City for years I decided that the alleys and torn poster walls were my ravines and cavewalls.  Currently my favorite images reflect the ancient myths, the Minotaur in particular.  I had seen in Spain the Toros, the reenactment of the animal/human confrontation, a ritual that portrays our dilemma.  We are both Beast Instinct and Human Intelligence.  Our intuitions switch back and forth.  My Way Words and my Bisoman images explore this reality. 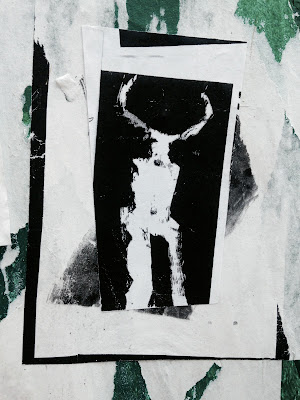 C: You open your book "Post no bills Poems" with a Zen proverb: can you tell us about your relationship to Zen and how it has shaped and poured into your way of looking at the world and making work within it?

R: On Venice Beach my very small circle of friends and I were in Zen Zone.  We tried to study meditation, we went to Gamelan concerts, and collected Ravi Shankar discs.  I carried around "Journey into the Interior" by Basho. "Interior"  meaning the remote mountains of Old Japan, but also the interior of the Spirit, the Soul.  I carried around my Six Sticks which I arranged in different ways here and there in streets, in galleries.  Why six?  Because of the Book of Changes, the Tao.  What  influence remains of all this amateur Zen?  The conviction that simple spontaneous direct is Grace, that Brief is Best.  The Creative expands, crosses boundaries and categories, embraces the Universal, the Totality.

C: What is the relationship between you and New York City? How does your work transform with the changing of the urban landscape?

R: I started working in the streets of downtown NYC because, for personal reasons, I would end up living here.  I would prefer to live in the country but I am here and try to make the best of it.  Drawing mountains and Biso figures (my Minotaurs) on wall covered with torn posters certainly has a visual effect.  But to have a transformative effect requires that people notice.  They don't. 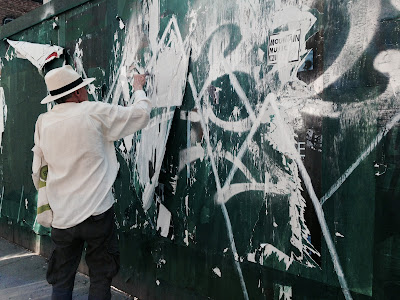 C: How and why did you start making water paintings?

R: As a youth I spent a lot of time roaming the deserts of the Southwest.  I saw glyphic drawings of the Ancients.  I felt their voices echoing thru me, from out of my interior.  For many years I drew with water only in the country.  It was a long time before I realized that it also made sense in the city.  Water drawing are truly immediately ephemeral, and the city is equally transient.

C: What is the role of the ephemeral in the work that you make and how does it affect the world around you?

R: Nothing is permanent, everything is passing on.  Expressing and celebrating this truth is the function of art. 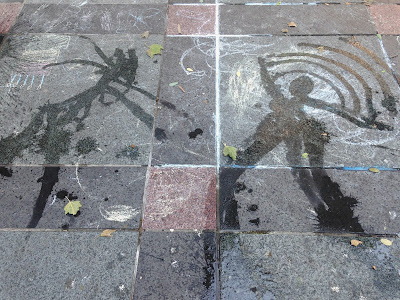 C: How do you work with language to challenge and transform its way of constructing the real world? Is there a specific process behind your distilled and powerful form of poetry? What do you think about the power of words?

R: Language is the most dangerous of all human inventions, the source of sexism, racism, nationalism.  Poetry is a crucial craft because working with words reveals and refreshes them.  I use alliteration to give my work a structure.  I was always interested in alliteration from childhood, noting  Jack and Jill,  Stars and Stripes.  Daring Devils and Demons.  When I started to focus on my own writing alliteration seemed to strengthen short poems.  Also seemed original, as in all my reading I have never come across a poet who uses alliteration as a basic structure. 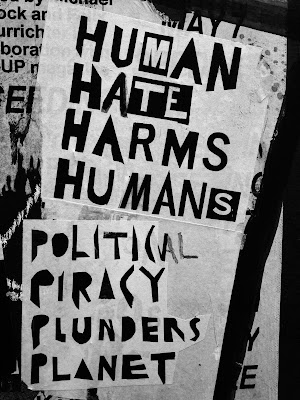 C: What do you think is the real and poetic impact of your work on a world that is reaching an absolute breaking point with greed, consumerism and selfishness?

R: I tend to write about poetry and poets.  My definition of Poetry is: words warp. language limits/ poetry pierces/ boundaries: breaking out   As far as impact goes, bonne chance!  I know of no artist that has reduced the self destructive self delusion of the world.

C: Do you think art can change the world around you?

R: Art is mind medicine.  But has the same limitations medicines have.  People must follow the instructions.  Think fresh, avoid cliche's: expansion, open, honest.  Even artists resist the truths their works express.  Selfishness shrinks the spirit, art expands the soul. 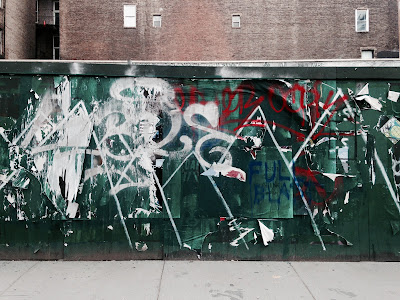 C: What is your view of the future of society and of this planet?

R: The future looks very dangerous.  There are many tyrants and tyrannies, all armed  The world is One, so every war increases the chances of a wider war.  Missteps are likely.  Humankind believes in Independence, in Sovereignty, meaningless words.  We are all interdependent.  The World needs a World Court to rule on conflicts of Interest and on Universal Rights.  I see no hope of that.

C: Can you identify other artists, both living or dead, that you would consider share your way of thinking and making work?

R: I like Basho and the Zen poets.  What is the sound of one hand clapping?  (Maybe it is art).

Email ThisBlogThis!Share to TwitterShare to FacebookShare to Pinterest
Labels: A conversation with Robert Janz, Events